WJHA students put to the test as volunteers at Camp Manitou 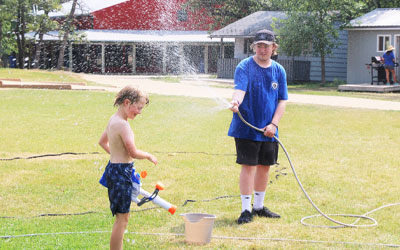 High school students are no strangers to tests. Typically, those tests focus on finding the radius and circumference of a circle or naming the topographical features of Canada. For students of the Winnipeg Jets Hockey Academy (WJHA), those and other topics are studied all school year with the help of WJHA tutors.

In summer, though, you won’t find those students writing tests of that sort, particularly if they’re spending time at Camp Manitou. Summer camp, after all, is about spending time in the outdoors where youth trade in their pencils and paper for bikes, boulders (on the rock wall), bait (for fishing), and bows (for archery).

That doesn’t mean that camp doesn’t provide any tests though. For WJHA students who are volunteering at the camp, lessons they’ve learned all year through the WJHA are being put to the test daily at Camp Manitou. Not the math and geography lessons, but lessons that revolve around interacting with others.

“Some skills I learned in the WJHA program were communication with other people,” said Kris, a Grade 10 WJHA student who volunteered at camp this summer. “For volunteering, you need to show responsibility and respect, which was shown to us in the WJHA program.”

Even Mitchell DeFehr, who helps to organize the volunteers at Camp Manitou, compared the WJHA students’ experience as camp volunteers to their time in the classroom.

“The opportunity is important for WJHA students because it gives them an opportunity to lead. In doing so they also learn how to be a good follower and team member. Learning how frustrating it is when a group of kids won’t listen is a good reminder of how teachers may be feeling in their classrooms.”

The students have more than just their WJHA experiences to draw from. With many of them having attended camp as campers, they’ve been given great examples of what it looks like to be a good counsellor.

“The counsellors and volunteers encouraged us a lot and made it a fun time. They played games with us and really got to know us,” added Deana, a Grade 11 camp volunteer, who also recalled her days as a camper.

The experience at camp is valuable for those beyond the WJHA too, as camp volunteer Tim can attest to.

“I always had really awesome counsellors, so I’m just trying to give all the kids in my group the same experience,” said Tim, a Grade 10 camp volunteer.

Now these students were tested on whether they could give the same awesome experience that they had as a camper to the next wave of youth.

DeFehr had the pleasure of seeing the volunteers figure that out through the summer first-hand.

“I saw their patience and responsibility put to the test,” noted DeFehr. “They set goals each week and needed to be accountable to themselves as well as to camp. Staying accountable is a skill that takes work, but it was awesome seeing the volunteers ask questions for how to stay on track.”

“One of the great highlights that I had was when one kid didn’t want to go on the zipline because they were scared, but I convinced them to go, and they had a lot of fun. They kept going on it and wanting to go later during the week. It’s just a satisfying feeling when you’ve accomplished something and made a kid’s day better.”

It’s moments like those that will stick with the volunteers long past this summer, and will hopefully fuel them to keep taking in the many lessons that come their way, whether in the classroom, at camp, or in any other setting they find themselves in.